Baaba Seth in Charlottesville: Concert Photos from the Anteroom, November 2017

I've been a huge fan of Baaba Seth since the first time I saw them in Charlottesville in 1996. Some of my fondest memories of being a student at UVA happened in and around their amazing concerts.

And although they play at least one reunion concert every year in C'ville, I haven't had the chance to see them since I think 2001 in DC. Luckily have managed to keep up with what's new with Baaba via singer / songwriter Dirk Lind. Actually Dirk is the amazing musician behind music in the short film I made for Surfer's Journal about Mega Semadhi and the Uluwatu temple in Bali (thanks again Dirk)!

Anyways, when Dirk mentioned the band was playing a small concert for friends after their TEDx Charlottesville performance, and I was going to be in Virginia at the time, I made sure to be there to catch the show.

As it turns out, I ended up shooting the concert for Baaba, and they were kind enough to let me get up on stage with them to try to capture some of the incredible and joyful energy that just spontaneously combusts out of them when they're all together.

Thanks again to Baaba for the perfect finale to this year's trip home to the States, and cannot wait until the next time I get to see y'all on stage.

Gerry Lopez first glimpsed Indonesia's mythical Uluwatu surf break in a surf magazine in the early 1970's - back then not many surfers were exploring the waves of Bali, Java, and beyond.With the debut of 'Morning of the Earth'in 1971, Alby Falzon and David Elfick's definitive surf film about the END_OF_DOCUMENT_TOKEN_TO_BE_REPLACED

Komodo to the Spice Islands – EPIC Trip Aboard the Seven Seas 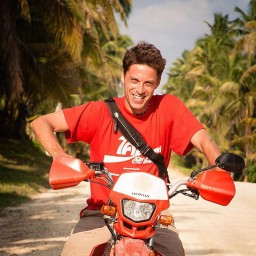